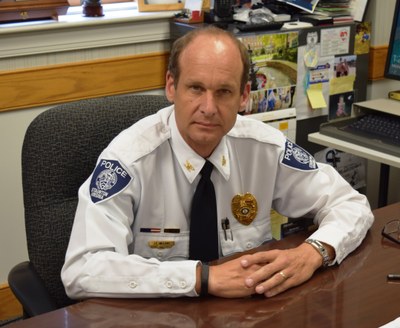 Chief Jim Williams was appointed to the position of Chief of Police on July 1, 2003. Chief Williams began his career with the Staunton Police Department as a police officer in September of 1984. During his career, he was promoted to the rank of Corporal, Sergeant, and Captain, serving as shift commander, investigations unit commander, team leader of the Critical Incident Response Team, and Division Commander of the Community Involvement/Support Operations division.

Chief Williams received a Master of Science degree in criminal justice from Virginia Commonwealth University in May of 1995. He is a graduate of the 183rd session of the FBI National Academy and has attended numerous other police management training courses. Chief Williams is currently an Executive Board member of the Virginia Association of Chiefs of Police and serves as an adjunct instructor of police science courses at Blue Ridge Community College.

Chief Williams has two sons, Jonathan and David and a daughter, Erin, with his late wife, Becky. He enjoys reading, running, travel, and coaching youth sports.

A proponent of community-oriented policing, Chief Williams believes that in order to be effective, the police and community must work together to effectively reduce crime and improve the overall quality of life.